Psoriatic arthritis, a chronic inflammatory disease that affects the immune system, is characterized by swelling, stiffness, and joint or tendon pain that is often accompanied by skin and nail psoriasis.1,2 Although psoriatic arthritis most often affects the distal joints in the fingers and toes, the disease can also affect the lower back, wrists, knees, and ankles.3

Psoriatic arthritis is associated with pain, itching, fatigue, limitations in physical function, and work disability—factors that can have a substantial impact on the patient’s quality of life.4 The disease is also associated with emotional duress that stems from frustration, embarrassment, and self-consciousness.4

On December 14, 2017, the US Food and Drug Administration (FDA) approved a new indication for tofa­citinib/tofacitinib extended release (XR; Xeljanz/Xeljanz XR; Pfizer) for the treatment of adults with active psoriatic arthritis who have an inadequate response to, or cannot tolerate, methotrexate or other DMARDs.6 Tofacitinib/tofacitinib XR, an oral JAK inhibitor, is the first oral JAK inhibitor to be approved by the FDA for the treatment of active psoriatic arthritis and for moderate-to-severe rheumatoid arthritis (RA).6

Tofacitinib/tofacitinib XR inhibits the action of JAKs, which are intracellular enzymes that transmit signals from multiple cytokines or growth factor receptor interactions involved in the pathogenesis of psoriatic arthritis.9,10 These signals are implicated in immune-cell function and hematopoiesis. JAKs activate and phosphorylate Signal Transducers and Activators of Transcription (STATs), a process that affects intracellular activity, including gene expression.9 Tofacitinib inhibits the JAK-signaling pathway, thereby preventing the activation and phosphorylation of STATs.9 Furthermore, tofacitinib may regulate multiple pathways associated with the stimulation and proliferation of inflammatory cells in psoriatic arthritis.10,11

The safety and efficacy of tofacitinib were evaluated in 2 randomized, double-blind, placebo-controlled trials—OPAL Broaden and OPAL Beyond—that included 816 adult patients.9,10,12 Eligible patients had active psoriatic arthritis for at least 6 months and had received a stable dose of a nonbiologic DMARD at baseline.9 The primary end points in both studies were the American College of Rheumatology (ACR)20 response rate (20% improvement from baseline across several specific measures) and the change from baseline in the Health Assessment Questionnaire-Disability Index (HAQ-DI) at month 3.9

At 3 months in the OPAL Broaden study, patients who received tofacitinib had significantly greater (P ≤.05) ACR20, ACR50, and ACR70 response rates compared with placebo (Table 1).9 In the OPAL Beyond study, the difference between tofacitinib and placebo was significant (P ≤.05) in ACR20 and ACR50 responses, but not significant (P >.5) in ACR70 responses (Table 2).9 In both studies, patients who received tofacitinib 5 mg or 10 mg twice daily achieved a significantly greater (P ≤.05) improvement in physical functioning (as measured by HAQ-DI score) versus placebo at 3 months.9 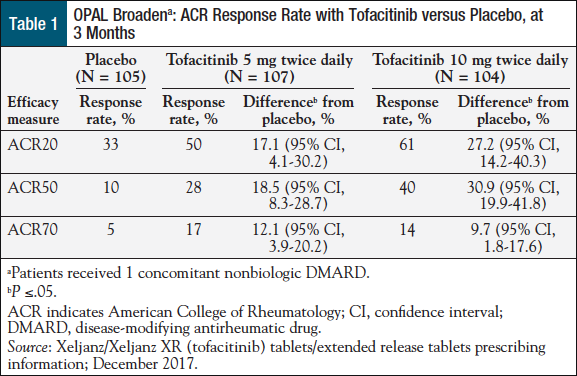 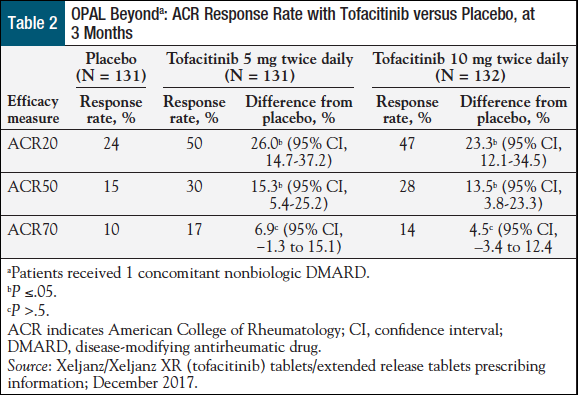 Tofacitinib has no contraindications.9

Tofacitinib/tofacitinib XR is not recommended for use in combination with biologic DMARDs or with potent immunosuppressant drugs, such as azathioprine and cyclosporine.9

For patients who receive ≥1 concomitant drugs that result in moderate inhibition of CYP3A4 and potent inhibition of CYP2C19 (eg, fluconazole), the recommended dose of tofacitinib is 5 mg once daily.9

Use in Specific Populations

Women of reproductive potential should use contraception during tofacitinib therapy and for at least 4 weeks after the last dose.9

Lymphoma and other malignancies have been reported with tofacitinib, as well as an increased Epstein-Barr virus–associated posttransplant lympho­proliferative disorder in patients who received tofacitinib plus immunosuppressive drugs.9

Tofacitinib should be used with caution in patients at risk for gastrointestinal perforations.9

Patients should be monitored for changes in lymphocytes, neutrophils, hemoglobin, liver enzymes, and lipid levels.9

The FDA approval of a new indication for tofacitinib and tofacitinib XR marks the availability of a novel oral option for appropriate patients with active psoriatic arthritis. In 2 clinical trials, tofacitinib demonstrated greater response rates in ACR20, ACR50, and ACR70 and in physical functionality, based on HAQ-DI assessment, compared with placebo.