The Lupus Research Alliance, a national voluntary health organization, has joined forces with Pfizer and Tata Consultancy Services to launch a new, custom, smartphone application that will allow patients with lupus to report symptoms of their disease via their iPhones.

“This is an important step in demonstrating that mobile technology can improve how and what patients report to their care teams about subjective but serious symptoms of lupus, such as debilitating fatigue. This app[lication] may enable more frequent and consistent reporting from patients, thus providing better information for care teams and empowering patients to take a larger role in developing future therapies,” said Kenneth M. Farber, co–Chief Executive Officer and co-President, Lupus Research Alliance, New York City, in a press statement released by Pfizer.

The effectiveness of the application is being assessed in the VALUE (Validation in Lupus of an Electronic Patient Reported Outcomes Tool) clinical trial, which is being conducted through the Lupus Clinical Investigators Network. Patients with lupus who participate in the trial will use iPhones installed with the application and report self-evaluated symptoms, such as pain and fatigue, over a 2-month period. The information collected through the application will be compared with data obtained through traditional paper surveys completed in physicians’ offices. The goal of the VALUE study is to determine whether information gathered by the application is sufficient and accurate enough to be used in future trials of new therapies for lupus.

“The current paper methods of collecting patient-reported data can be cumbersome and inconvenient, and often depend on memory. VALUE holds promise for ‘in the moment’ reporting of symptoms and may open the door to similar tools being used in Pfizer-sponsored clinical studies for lupus and other diseases,” said Freda Lewis-Hall, MD, Executive Vice President and Chief Medical Officer, Pfizer, New York City, in the press release.

Results of the VALUE trial are anticipated for December 2017. 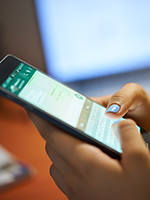