Osteoarthritis (OA), a condition that frequently develops in older individuals, can lead to significant pain, decreased joint mobility, increased healthcare costs, and a diminished quality of life. Although researchers and clinicians have identified certain risk factors associated with this condition, such as obesity, there is a lack of clinical tools available to help determine which patients are likely to develop OA, or how severe the condition may become over time. However, results of a recent clinical trial suggest that a new algorithm may be helpful in predicting OA progression, and in turn facilitate treatment decision-making (Liukkonen MK, et al. Sci Rep. 2017;7:9177).

In this trial, Mimmi K. Liukkonen, MSc, Department of Applied Physics, University of Eastern Finland, Kuopio, and colleagues evaluated the accuracy of using a cartilage degeneration algorithm to predict OA progression and grade the severity of the disease, using the Kellgren-Lawrence (KL) classification criteria. The algorithm was based on stresses that the knee joint experiences during walking; these stresses were simulated through the cartilage degeneration algorithm for 3 different KL grade groups—KL0 (body mass index [BMI], 23.1 ± 1.6 kg/m2), KL2 (BMI, 33.0 ± 22.7 kg/m2), and KL3 (BMI, 33.7 ± 7 kg/m2).

“The aim of the current study is to investigate the ability of the algorithm to separate clinically healthy but obese subjects, diagnosed from the baseline radiographs, into different KL grade groups based on the predicted level of cartilage degeneration,” Ms Liukkonen and colleagues explained.

The cartilage degeneration algorithm was applied to 21 patients from the OA Initiative Database who had no evidence of OA at baseline. Participants were aged <65 years, had intact meniscus, and had no history of knee injuries. The patients were divided evenly into the 3 KL grade groups (N = 7 for each group).

The results of the algorithm were compared with KL grades obtained via clinical radiography and magnetic resonance imaging scores from patients’ 4-year follow-up visits.

Ms Liukkonen and colleagues found that the algorithm allowed them to correctly categorize patients by degeneration value, including patients without OA, patients with mild OA, and patients with severe OA.

Because the degeneration algorithm was able to predict cartilage degeneration for obese participants, and—based entirely on mechanical overloading—separate healthy individuals from patients with OA, Ms Liukkonen and colleagues assert that the algorithm has the potential to be a valuable tool for helping clinicians determine individualized treatment plans that may prevent further symptoms.

“This could decelerate or prevent the progression of OA and delay the need for total knee replacement surgery,” they concluded. 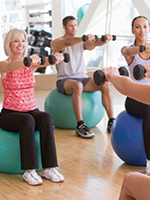 Patients with Arthritis Need More Counseling on the Benefits of Exercise
Rebecca Bailey
VBCR - April 2018, Vol 7, No 1 published on April 17, 2018 in Health & Wellness